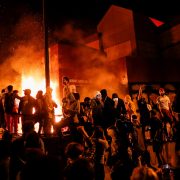 A man was treated unjustly by the very authority charged to keep him safe and as all the world now knows, he lost his life instead.  The man I’m speaking of here is Jesus Christ.  There were no after-action mobs protesting His death.  No pillaging, looting, plundering, or burning government or private property.   After watching Jesus breath His last the mob proudly beat their chests and went home (Luke 23:48).  They thought that they had gotten rid of their problem by killing Jesus.

Fifty days later, the name of Jesus Christ was spreading through the world in such a powerful manner that mobs, Molotov cocktails and raging anger can never accomplish.  That great and holy name has lasted and has become the Salvation of the world.  Jesus Christ came into the world to save us from mayhem and hooliganism not to place His approval upon it.   In His own day Jesus evaluated the human condition saying,

“For a good tree does not bear bad fruit, nor does a bad tree bear good fruit. “For every tree is known by its own fruit. For men do not gather figs from thorns, nor do they gather grapes from a bramble bush. “A good man out of the good treasure of his heart brings forth good; and an evil man out of the evil treasure of his heart brings forth evil. For out of the abundance of the heart his mouth speaks” (Luke. 6:43-45)

As citizens of this country we all must demand justice for Mr. Floyd of Minneapolis.  At the same time, we must all own that angry mobs can never accomplish a true and civil justice.  Christians must be on guard against those inciting crowds of people to commit further acts of violence or worse actually taking part with them in those acts.   We must also be on guard over our own hearts as we all can too easily fall prey by watching the same viral video over and over again or listening to the incessant reiterations of the event by news media coverage working their audience into a mad frenzy of shame.  Be aware that these are methods of anarchists and they tend to the subversion of the rule of law in a civil society and in this they do not differ from police abuse.  This is not the way of peace and reconciliation.

Before you enter the crowd at the office or in the public square, before joining around your television with family and friends, recall that God tells us we must not follow a crowd to do evil (Exodus 23:2) not even in our hearts.

Follow instead the multitude of principles given to us by God in the Bible.  Deescalate the tensions that exist by speaking and living in a manner meant to build up your neighbor by speaking the truth in love.   Calculate the response to the words you are about to speak using the words of the old adage, “A soft answer turns away wrath, but a harsh word stirs up anger” (Prov. 15:1).

Affirm your underlying principles, like those found in Paul’s letter to Roman Christians.

Live in harmony with one another. Do not be haughty, but associate with the lowly. Never be wise in your own sight. Repay no one evil for evil, but give thought to do what is honorable in the sight of all. If possible, so far as it depends on you, live peaceably with all. Beloved, never avenge yourselves, but leave it to the wrath of God, for it is written, “Vengeance is mine, I will repay, says the Lord.” To the contrary, “if your enemy is hungry, feed him; if he is thirsty, give him something to drink; for by so doing you will heap burning coals on his head.” Do not be overcome by evil, but overcome evil with good. (Romans 12:16-21 ESV)

Offer the hope of the gospel to those who are dispirited by the recent actions concerning Mr. Floyd’s death.  It was heart wrenching to see a man asking for air to breath.  Why shouldn’t we be incensed to learn this man was denied his request?  But let that indignation be quelled in sea of God’s grace by taking them to the cross of Christ.  Tell them of the love of God in Christ toward a world that was filled with a raging enmity against the very One, the only One who could save them, even in the face of unparalleled hostility (Psalm 2).  Let the world once again see both the brutality and obscenity of the cross as well as the beauty and wonder of the cross of Christ.

For to this you have been called, because Christ also suffered for you, leaving you an example, so that you might follow in his steps. He committed no sin, neither was deceit found in his mouth. When he was reviled, he did not revile in return; when he suffered, he did not threaten, but continued entrusting himself to him who judges justly. He himself bore our sins in his body on the tree, that we might die to sin and live to righteousness. By his wounds you have been healed. For you were straying like sheep, but have now returned to the Shepherd and Overseer of your souls. (1 Pet. 2:21-25 ESV)

Take the angry unruly hearts of our land to the cross of Christ to see the example of how God’s grace rules in a sin cursed world.  Friends, I’d rather live in an imperfect society ruled by grace than in an imperfect world driven by anarchy.

Gentle Reformation
A Time for Fasting and Prayer – April 4th, 2020