Below are answers to a few of the common questions we receive about our church. If you do not see the answer you are looking for, or if you just need further information or clarification, please feel free to contact us.

Q: Why don’t you use a piano, organ or worship band?

A: In keeping with the New Testament Church’s directive for heart worship, we sing without the aid of musical instruments.

Q: Why do you just sing Psalms instead of Hymns?

A: We believe that, in order for our worship to be acceptable to Christ, it must follow the clearly-defined parameters set forth in His Word. And while there is abundant biblical evidence that Psalms were used for praise in both the Old and New Testament eras, there is no evidence in the Bible that God’s people ever used uninspired human compositions (i.e. hymns) in public worship.

Q: Can visitors participate in your Communion Services?

A: We are not casual about our Communion services. Rather, we look upon this remembrance of our Lord’s death as a holy and precious experience. The Scriptures promise rich blessing to those who approach rightly (1 Corinthians 10:16-17) and warns of spiritual harm to those who don’t (1 Corinthians 11:27-30).

Because of this instruction in God’s Word, and for the good of all concerned, our church asks that all who wish to participate in the Communion Services, first meet with our Elders (the Session) to make a profession of their personal faith in Jesus Christ, describe their relationship to a true branch of Christ’s Church, and discuss the meaning of this Sacrament.

Even if you are unable to participate, this Sacrament can be a great blessing to all who hear God’s Word preached, join in His praises, and witness this simple yet profound Memorial Celebration which recalls the sacrificial death of our Lord Jesus Christ for His people.

Q: What is the significance of the banner with the words “For Christ’s Crown & Covenant?”

A: The Blue Banner dates back to our spiritual ancestors of the Protestant Reformation. Reformed believers (known as Covenanters) insisted on “the crown rights of King Jesus,” which brought them into conflict with those who supported “the divine rights of kings.” The blue banner bearing the motto “For Christ’s Crown and Covenant” originated in 1639 as a battle flag for these Covenanters.

During the period of most intense persecution (1680-1688), some 18,000 men, women, and children died in battle, were executed, killed without process of law, or exiled, for their faithfulness to ‘Christ’s Crown and Covenant.” Since the end of “the killing time,” the Blue Banner has continued to serve as a symbol of the Reformed faith. The Reformed Presbyterian Church is the continuation of the Covenanter church in Scotland, and treasures the testimony and heritage which God has given to it. The banner itself has no theological significance, but serves as a reminder of our commitment to the great truths of the Word of God. 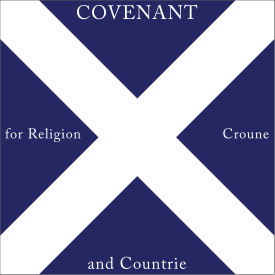